In the Presence of Patti Smith: The Year of the Monkey Tour in Los Angeles

The pages previous to writing this in my journal are filled with sloppy, scrawled bits of phrases, the few words I tried to capture in the darkened Alex Theatre while also remaining fully present with Patti Smith. She took the stage to a standing ovation, and I teared up, in the presence of a person whose words and way of life have helped shape my own. As she sat in an oversized armchair, she joined in conversation, speaking about the dreamlike quality of her new book, Year of the Monkey, set amidst loss and life and the often nightmarish backdrop that shaped so much of that election year.

She shared how her famous boots, pictured on the jacket cover and modeled on her feet as she raised one sole to show us, were a gift from Chanel for a climate justice fundraiser she took part in (pause while I search eBay for size 11 Chanel combat boots), and how they’d held up over five years, and had traveled with her around the world. She was funny and authentic, noting how great it feels to make people laugh. Asked about her love of detective stories, and whether she’d ever write one, she said she’d like to write a mystery where nothing happens. Everyone laughed, but everyone who has explored the world through her writing knows that her book where nothing happens would be the most fascinating detective novel filled with details and sensory perceptions of place and people and time. "I think the mind of poets and detectives are similar," she said, "digging into the abstract."

She answered Q&A questions attendees had written on index cards before the event. When asked in line if I had a question to jot down, my first thought was, would it be inappropriate to write “Can I take you out to dinner after?” I was still in the meditative mood of the world she’d drawn me in to with her book and simply wanted to stay there, and hoped the moderator might have more intelligent questions than I.

Onstage as she described a perfect performance, whether it’s song or written word, Patti reminded us that it’s not that it’s perfect, it’s that you’re in it. As she performed one of her songs that night, she missed a phrase, said “fuck!” with a grin, and kept going, completely in it. It reminded me of that perfect performance when she accepted Bob Dylan’s Nobel Prize by singing A Hard Rain’s A-Gonna Fall, and seemingly lost the words in the middle of the performance. In her own words in The New Yorker, she shared the entire experience, including that moment, “The opening chords of the song were introduced, and I heard myself singing. The first verse was passable, a bit shaky, but I was certain I would settle. But instead I was struck with a plethora of emotions, avalanching with such intensity that I was unable to negotiate them. From the corner of my eye, I could see the huge boom stand of the television camera, and all the dignitaries upon the stage and the people beyond. Unaccustomed to such an overwhelming case of nerves, I was unable to continue. I hadn’t forgotten the words that were now a part of me. I was simply unable to draw them out.”

I remember watching that performance, and sensing authenticity in an artist that I’d rarely seen. It spoke deeply to my own struggles with perfectionism and fear in expression. It was the same last night – her total presence of vulnerability and confidence as she read with hilarious comedic timing from her Belinda Carlisle chapter or with deep emotion an elegant, heartbreaking portion of poetry about the immigrants and artists of the world.

With Tony Shanahan on the piano, Patti stood at the mic, taking turns between reading from her book and singing. She led us in collective song to wish John Lennon a happy birthday. She sang a cover of Neil Young’s After the Gold Rush, her voice powerful and pure, changing the last line:

I still wish I’d tried my luck with my dinner invitation via the Q&A, but am happy I get to see the world through Patti's vision any time I open one of her books. Even though a copy of Year of the Monkey came included in the ticket price for the event, I’d already bought a copy in the week of its release at Skylight Books, knowing I couldn’t wait to read it, and that I could gift one to my friend, a fellow Patti omnivore. At the theatre, I scanned the book table, to make sure that I hadn’t missed a book. I’ve scoured bookstores for the more obscure, from Woolgathering to Early Work, 1970 - 1979, a book I’d asked my mother-in-law to hunt down for my Christmas gift. Each book is uniquely Patti, and I recommend you read them all, in the hopes that we can all treat each moment like the work of art it is, from a great cup of coffee to a conversation with a dear friend or stranger, to a connection with a guy scrawling words on the street. 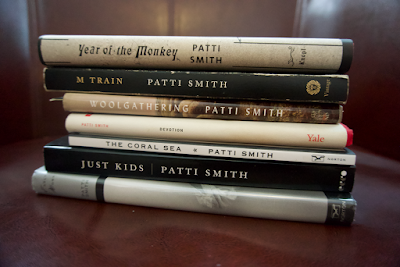