Today in Congo, 7100 people gathered in Bukavu today to say "Enough is enough!" They raised their voices to show unity in nonviolent resistance, to take action, to show up, to cry for justice and peace in Congo.  Please download the PDF (below) and post, or print and take a selfie with it, telling why you #‎StandwithCongo‬, the civil society leaders, and the Congolese people calling for peace and ‪#‎Justice4Beni‬.  Use the hashtag #JeSuisBeni.

To learn more about the massacres that have killed more than 500 civilians since October 2014 in Beni, DRC, including the targeting of children, read Congo Research Group's report here: http://ow.ly/i6u0300pYX7


To quote Dr. Omekongo Dibinga: "Our destiny is inextricably linked."

I am honored to work alongside Congolese community builder and civil society leader Amani Matabaro, an organizer of the rally.

Amani paused to thank the young man holding a collection of photos of just some of those hundreds of civilians killed in Beni. The man sat on top of a car, sharing the story of Beni, showing the images to people in Bukavu, Congo who have no internet, no way of knowing the horrors that continue to be committed in Beni.

"You must be tired now. We need someone else to help you hold the banner," Amani told him.

"How can I imagine to be or feel tired," the young man replied. "I am 23 years old and have only seen violence, this cycle of violence must stop. I believe in showing these photos we will all revolt and say NO, NO!" 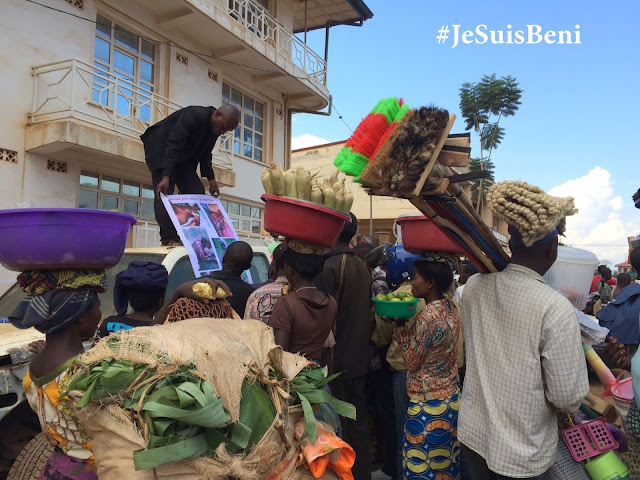 Posted by Rebecca Snavely at 11:04 AM No comments:

The Longer the Candle Burns: How to Take Action, Demand Compassion, and Create Homes for the Homeless