It's already after 8 a.m., and, out of cream for our coffee, I lace up my old running shoes, the ones with the worn-through insoles, to make the quick walk through the neighborhood and down the steep hill to the corner market.

I take the corner at my make-the-most-of-every-step pace, and the colors of a small milk container on its side, on the ground, catches my eye. (Did I consider for a second that perhaps someone had dropped an un-opened container of half-and-half and I wouldn't have to hike back up the steep hill?  Of course not.)

By this hour, the city has already been through our streets, emptying the yard and recycling bins that had been parked along the curbs the night before.  The trucks arrive with the birds, beeping as they back their way down our one way street, a bright sign on the truck's side telling us to keep Los Angeles beautiful.  But before the machines arrive to clumsily toss and shake what is leftover from our weeks, our daily routines of unwrapping meats, opening cartons, pouring cream into our coffee mugs, before it is quite light enough to see the movements of morning, scavengers have come. Hard workers load pickup truck beds or grocery carts that have that one wobbly wheel.  They comb through what we recycled. They cart it away, to change into funds for food, for more gas for that truck, for school supplies.

Mary Oliver tells me never to hurry through the world, but to walk slowly, and bow often. I stop and bow, one foot in the gutter, to pick up the empty milk carton, and toss it back into the bright blue bin.
A few more steps up the sidewalk, I meet Olive the dog.  She doesn't want to sit still for a photo, and talks to anyone who will stop to listen to pet her sleek black coat, her voice a high whimper of joy. I bow to pet her, and tell her human to have a good day.

My steps are slower now, and I bow once again, taking a photo of the brown leaves that fell around pink flowers, signs of the mash-up of seasons in L.A.  The bells of St. Francis chime, reminding me that I'm taking longer than I planned, on my walk for cream for our coffee.


At the corner, I wait for the light with tourists wearing shorts and backpacks, who consult the maps on their phones and each other before crossing over to the cafe that smells of pancakes and eggs.

Swiping my card for the carton of cream, I hike back up the hill.  My eyes catch a Budweiser can peeking out from a bush.  I think of Mary, and bow to pick it up, gingerly holding the sticky dirty aluminum between two fingers to toss into the recycling bin.  There is evidence of a dog's morning walk left in a pile. I do not bow.

Retracing my steps, where I'd met Olive the dog, I say good morning to the white haired contractor starting his day, pulling supplies from the back of the Ford F150 that is too bulky for our old, slender street where cars take turns to pass by.  I bow to take off my shoes at the door, set the cream on the counter. The boyfriend, deep in the world of his work, never noticed how long I was gone.

When I Am Among the Trees

When I am among the trees,
especially the willows and the honey locust,
equally the beech, the oaks and the pines,
they give off such hints of gladness.
I would almost say that they save me, and daily.

I am so distant from the hope of myself,
in which I have goodness, and discernment,
and never hurry through the world
but walk slowly, and bow often.

Around me the trees stir in their leaves
and call out, "Stay awhile."
The light flows from their branches.

And they call again, "It's simple," they say,
"and you too have come
into the world to do this, to go easy, to be filled
with light, and to shine." 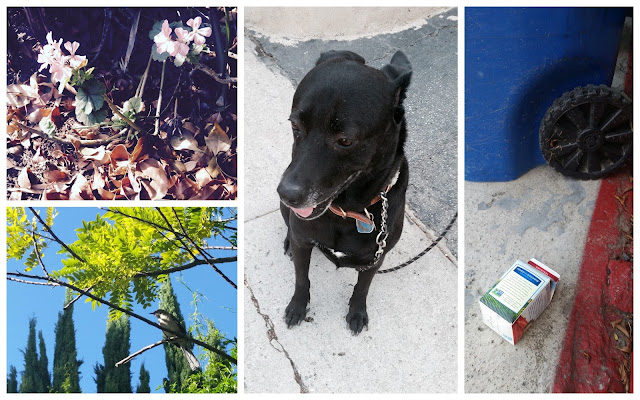 Posted by Rebecca Snavely at 2:13 PM No comments:

How Watching ‘The Visitor’ with Refugees Changed My Life: Movie-watching, Tea Drinking, and Lessons in Connectedness