Music, Silence, and Snoring: We Shuffled in from Trafalgar Square

We shuffled in from Trafalgar Square, a mix of retirees, tourists, and homeless, de-coating and de-scarfing, we opened the low doors to each church pew, settling bags and unopened umbrellas onto the shelves at our knees. Unaccustomed to high church, I unwittingly propped my boot-clad feet on the kneeling bench. Sensing side-eye from my pew-mates, I quickly adjusted myself on the hard bench, feet properly on the floor. 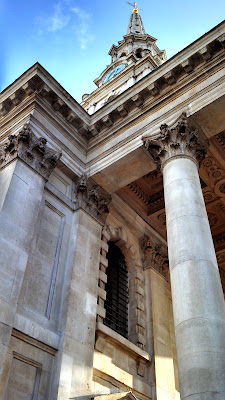 The afternoon sun was shining in through windows high above; St. Martin-in-the-Fields sanctuary an open and airy space. The bright light a rarity in wintry London, it was tempting to cut out of the concert to enjoy rain-free skies. But it was too late: two wee pianists, both born in Romania, stepped out from the front of the sanctuary, and sitting side-by-side, hands hovering above the keys to play “piano four-hands.” They began with Mozart’s Sonata in C Major, and moved on to Schubert’s Fantasia in F Minor.

The pianists' brunette heads bobbed and dipped toward the piano, sometimes individually, sometimes in unison as they moved with the music. The homeless, white-haired man in front of me bobbed his body in rhythm with his own beat. Around him, heads bobbed to the left and right, unable to ignore his snores.

Together, we created our own concert, bobbing heads, snores, hands half-raised, unsure if it was the right time to applaud in the moment of silence between movements, til the music swelled again, and the homeless man's head jerked to attention.

And later, at dinner, a Sunday roast at the local pub near where the boyfriend is living in London, he, a singer/songwriter, talked about the necessity of silence behind the song, the space created for words to stand, to breathe, to be both fluid and strong, to inhabit their meaning and, when heard, move beyond. It is true in writing prose as well; when I write or re-read a piece and feel frenetic, I generally delete or shred, knowing it best to start over from a place of peace.

"The first rule in answering, if there is one, is to wait. The part of our brain that has the 'right' answer for everything is a dull place, built of endless chains of associations, everything we knew in the past. This knowing may be factually correct but there’s a problem with it. It is dead.

"To touch something that is unique, alive, calls for a search: 'Is this really true right now?' (Most likely that first instant response is already known to the questioner, and she is hoping for something new.) A response unique to the moment is precious, and even, one might say memorable.

"But waiting even a split second takes courage. Dare I search in myself for what is more true? What if nothing better arises? Never fear, there is a deeper wisdom in each of us, and it needs space, and a little time to appear. It needs my trust."

–Lillian Firestone on how to answer a spiritual question from Parabola Magazine's winter issue. 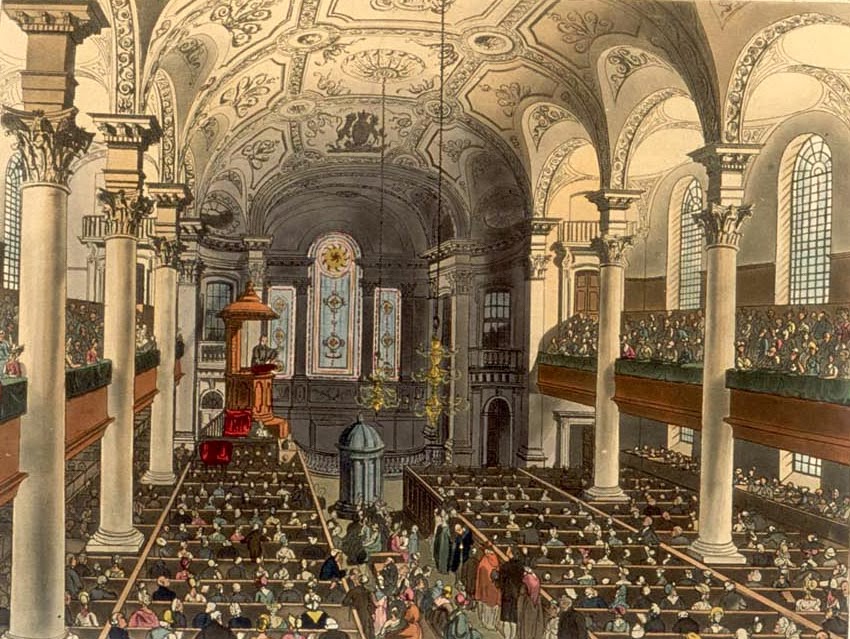 Sugar Says - Write Like a Motherfucker; Look Hard; Risk That

As 2013 turns into 2014 and I watch fireworks and kiss cold cheeks and lips and warm my hands inside a pub and dance and drink and eat - I keep returning to tiny beautiful things - Advice on love and life from Dear Sugar.  I'm reading it as I consider a new year marked, and what that might mean in my life. Submitting my writing to a broader audience, I may post this piece of advice Sugar (revealed as Cheryl Strayed) wrote to Elissa Bassist, inserting my name as needed, to my writing desk: 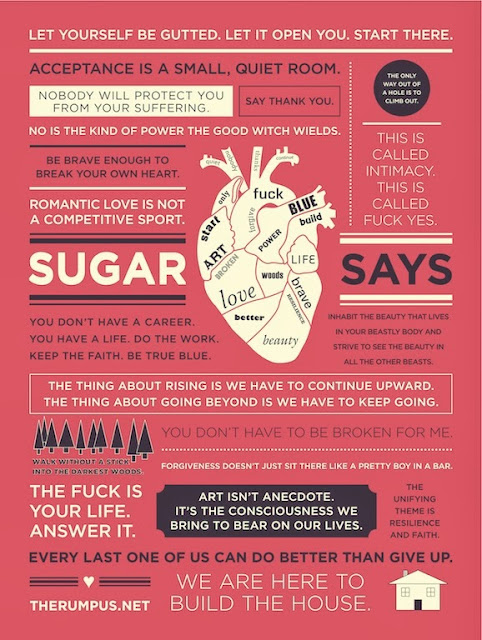 
It's going to be difficult, but that's no surprise. The story of human intimacy is one of constantly allowing ourselves to see those we love most deeply in a new, more fractured light. Look hard. Risk that.

Posted by Rebecca Snavely at 12:32 PM No comments: