I love slowing down, talking to strangers and feeling more connected. Taking the time to observe the connectedness that's always around us. Finding connection in unexpected places, like finding a real-life friend via Twitter.

My Saturday started in Atwater Village at Proof Bakery, where a septuagenarian in a cowboy hat and wiry white beard informed me he was there to test whether the L.A. Times story on the city's best croissant was correct. He'd been to Paris several times, and, frankly, doubted it.  He took his pastry to go, so, sorry guys.  We'll NEVER KNOW.

The bakery was bustling, and I was there on a first-friend-date (yay, Twitter works for actual socializing!). Just like a regular first date, I was a little nervous about what we might talk about, would we like each other? Would I be funny enough to keep another writer entertained? What would we do if there was nowhere to sit, and we had to walk and talk, and I'm tall, which always makes that a little weird.  So I snagged the last two-top from under the slower moves of an elderly couple. I needed the table more than them, they way they were supporting each others' elbows, they clearly had known each for years.

It was all for nought (sorry, grandpa!) as my new friend and I fell into that getting-to-know-you give and take of any good first encounter, where we discussed overcoming perfectionism to learn something new (violin?), writing practice and childhood trauma.  The usual coffee talk.

We made our way over to Individual Medley, a lovely space with gorgeous clothes, home decor, trinkets, and a popup flower shop.


She gave me honest opinions on hats (too 'Crocodile Dundee') — a trait which is hard to find in a friend.  She hugged hello to the owner, and introduced me. A newish transplant to L.A., she's already making it home. And after my 15 years of finding my friend-family here, I'm excited to keep expanding social circles, have good deep conversations and trade book recommendations, and introduce a new friend to our community.*

(Oh, and yeah.  We sat near Joel McHale from the show "Community."  He's really quite handsome, I don't know if he's ever been told that?  And he was playing with kids. And I STILL managed to be present with a new friend.)

Posted by Rebecca Snavely at 4:56 PM No comments:

On Ladyhair Length and What Being Brave is Actually About 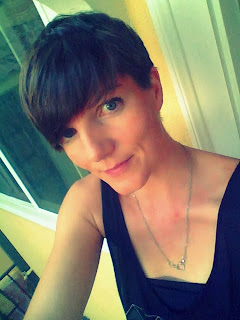 "You look fantastic," a fellow office-dweller stopped me mid-coffee pour. "I’d never have the balls to do it, but you look amazing."

I’d never been privy to my colleague’s ladyparts, but I’m pretty sure she does not, indeed, have balls.  Nor do I, which is why I was surprised to hear that I’d recently grown a pair.

What, you must be wondering, did I do to earn these brave ladyballs?  Ink a prominent tattoo on my face? Add a bionic limb that would somehow solve world hunger?

I cut my hair.

Yep. I cut off long locks I was bored with, for the short do favored by famous women like Audrey Hepburn, Mia Farrow, Linda Evangelista, Gwyneth Paltrow, Michelle Williams, Ginnifer Goodwin, Anne Hathaway, Robin Wright, and Charlize Theron, to name just a few.

By sitting in that barber chair at Rudy’s, I joined a brave bunch, baring the backs of our necks to the scrutiny of society, laughing in the face of long-haired femininity.

I was mostly bored, but a part of me also wondered if I was hiding behind my pretty hair.  If I could still be pretty and attractive with a "boy-cut."

My boyfriend told me immediately that it was hot, and super stylish.  And then referenced Tinkerbell twice. That’s ... cute, right? But while I like fairies, I don’t exactly view them as hot. And started to wonder if / why my boyfriend might.

Me: "So, you have a Tinkerbell fantasy?"

Him: "Not yet. Kind of a steric hindrance issue there."

Me: (Reading the most basic definition of steric hindrance on Wikipedia and still not understanding what he meant.)

Him: Scientific term for when things won’t fit because of dimensions.

Me:  (Still reading about chemical reactions. Thinking that he means there’s no longer space for chemistry with me now that I cut my hair?)

Him: I do have a Wonder Woman fantasy, though.

Me: (Inwardly crumbling, as my former do actually DID resemble Wonder Woman’s).


I decided I didn’t want a text to tell me that my boyfriend was that shallow and only loved me for my hair, so I waited til I returned home from my work trip, groomed myself as best I could, and took him to coffee, where I explained how the Wonder Woman comment made my short-haired self feel a wee bit un-Amazonian.

Boyfriend was BAFFLED. He had been trying to make a "science joke" (apparently there are such things) about Tinkerbell being too small to have sex with.

I laughed til I cried. And I panicked that my understanding of who I am, and what it means to be feminine, could be so fragile.

But it is, partly because I was born on planet Earth, in the United States of Advertisers pushing beauty products. And, when I posted a photo of my haircut, I got comments from even the most feminist of women telling me how brave I was.  Stopping in the hair aisle of Target to choose a new color to compliment my short do, a 20-something took one look at me, and unasked, said, "I wish I had the guts to go that short."

Even little girls are already aware of what ladyhair *should* look like. Glennon Doyle Melton of Momastery posted this on Facebook:

Tish: Mom,I saw on TV that when your hair looks all bad like that, you can say it's "beach hair"and you don't have to be embarrassed.
Me: Kay. Well, I'm not embarrassed of my hair.
Amma: Mommy, that's vewy bwave of you.

So, while I dig in to what society has told me about how I should look, and why it’s so brave to buck that trend, and whether men are still going to look at me, and why I CARE if men look at me, I’d like to talk about what it means to be a brave woman.

When I think of the brave people in my life, I think of those who are open, honest, and vulnerable with their emotions.  People who are scared when facing a challenge, and admit it, and ask someone, sometimes in just a wee whisper, for help.

I think about the woman whose best friend or sister has lost her hair from cancer treatment, and shaves her head in solidarity. But the truly brave woman? The one FIGHTING FUCKING CANCER, who doesn’t give up. The mom who admits a terrible, no good, really bad day, and still wakes up in the morning and tells her kids she’s proud of them, and pursues her goals in life, to show her kids what it means to live life out loud. The women I work with in Congo, who, in the face of poverty, horrifying violence, and daily degradation, wake, attend literacy classes and learn to farm and make clothes and baskets to sell to earn income to feed their kids.

Language matters, and with my close friends, I've asked them to question why they're saying I've got "balls"  (why do we still refer to male genitalia for boldness?) to cut my hair. Please don't call me brave because I went with a new do that tons of actors and models have worn before me. I want to be brave, not because I cut off a braid, but because I am living life without worrying what others think.
Posted by Rebecca Snavely at 9:51 PM 4 comments: