I know not everyone has the lifestyle / time in the day to live life on the L.A. public transit schedule. But just for a weekend? Leave your car parked at home, and see what happens.

This weekend, I was on a bus down Sunset, where a young kid, somewhere between 12 and 15, sat on the sideways seat at the front, and periodically leaned back to make eye contact with the woman in the first row of front-facing seats. He squinted a smile, wiggled his eyebrows like a Marx brother, and laughed as she winked back.  Developmentally challenged, he showed pure joy through connecting with a stranger and making her smile. I couldn't stop smiling either, nor could the guy in a wheelchair or the driver, who both waved goodbye as the kid exited and waved wildly, four times, as the bus pulled away from the stop.

Today, walking back from a jog at the reservoir and then a run to CVS and Ralphs, back past the reservoir on my way home, during which hour I ran into Giovanni Ribisi not once but THREE times (as this is L.A., and he's clearly stalking me) I saw an elderly man crumpled at the curb, his cane tossed carelessly behind him, his eyes closed. I doubled back, and another woman stopped with me, to question him if he was okay. He may be drunk, the other woman said, but when my dad goes into diabetes shock, he looks drunk. The man opened his eyes to our questions, and convulsed a bit, but was non-responsive. I started to dial 911, then realized that a couple in a truck had stopped already, and were on the phone with the paramedics.

Though I wondered if I should have stayed to make sure he was okay, the woman and I walked away, assured the couple would wait til the ambulance arrived. We told each other to have good days, and I left feeling a little more connected to the strangers in my neighborhood. It's good to get out and walk, to pay attention to who might have fallen by the side of the road, whether literally or hiding it in their daily duties.

It's good to be car-free.
Posted by Rebecca Snavely at 3:22 PM 2 comments: 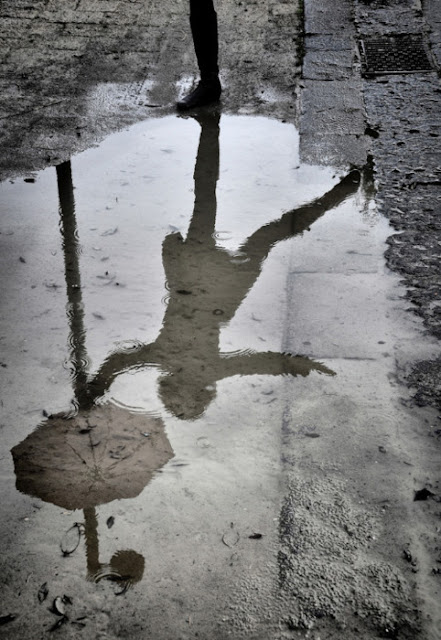 In spring the blue azures bow down
at the edges of shallow puddles
to drink the black rain water.
Then they rise and float away into the fields.

Sometimes the great bones of my life feel so heavy,
and all the tricks my body knows―
the opposable thumbs, the kneecaps,
and the mind clicking and clicking—

don’t seem enough to carry me through this world
and I think: how I would like

to have wings—
blue ones—
ribbons of flame.

How I would like to open them, and rise
from the black rain water.

And then I think of Blake, in the dirt and sweat of London—a boy
staring through the window, when God came
fluttering up.

Of course, he screamed,
and seeing the bobbin of God’s blue body
leaning on the sill,
and the thousand-faceted eyes.

Well, who knows.
Who knows what hung, fluttering, at the window
between him and the darkness.

Anyway, Blake the hosier’s son stood up
and turned away from the sooty sill and the dark city—
turned away forever
from the factories, the personal strivings,

to a life of the the imagination.


(Photo: Distorted Reflections, Warped Mirror)
Posted by Rebecca Snavely at 7:37 AM No comments:

I had put off going for a jog long enough, my morning coffee buzz threatening to wane, I laced up, lathered up with SPF 45, tugged my hair into a ponytail and headed down the hill to the reservoir.

Not a natural jogger, I tend to go too fast and wear myself out. It takes being present and listening to my body for me to find my pace, to slow down and get into a good groove, a rhythm that I can sustain.  I had just found that, and was slowly making my way, weaving through baby strollers and dogs with their humans, when I saw my new friend, the woman I had so rudely and serendipitously interrupted at a neighborhood bar. We had already spent a day discovering how much we had in common, and felt a strong kindred connection, which was strengthened as we made a lap around the lake, talking about recent experiences, and the frustration of staying in the moment, especially when the moment is one full of ambiguity.

My new friend talked about small miracles of connection, recognizing how often paying attention and simply showing up offers the most amazing opportunities in life.  She had just been to the reservoir over the weekend, and spotted a coyote inside the fence, and mentioned that she should look up more about what the coyote tells us as a totem, spirit guide.  Moments after, we saw our trickster-fool of a friend hunting through the low-lying bushes, seeming to dart away from a lizard.  We stopped to watch him, trying to call him closer, safely behind barbed wire. 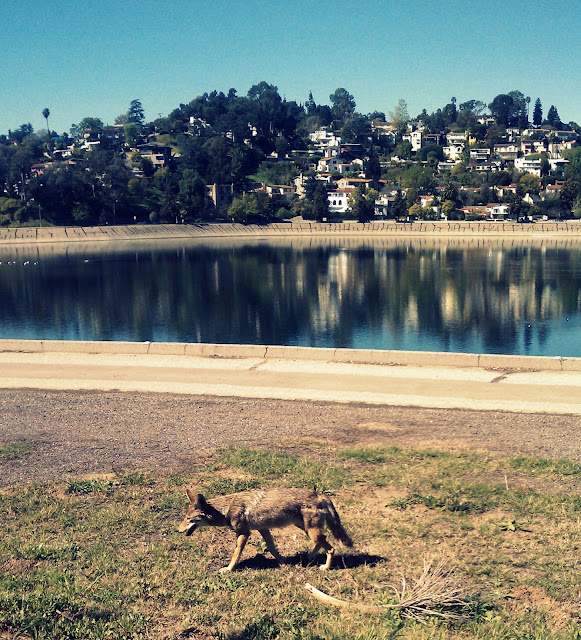 "The Coyote is a clown in the natural world, and in many Native American tribes view the symbolism of the Coyote as that of trickster, shape-shifter, and transformer," Avia Venefica writes.

"Legend has it Navajo never kill Coyote because of their belief that it accompanied the first man and woman into the entrance of the first physical world.

"Also, in the same myth, the Coyote brought with it seeds of life so as to sew new growth upon the new world. This legend depicts the Coyote as a bringer of life and a new birth symbol.

"Shoshoni believed the Coyote as an indication of an ending. The sighting of the Coyote was said to bring natural shifts in balance, causing an end (which, of course, simply makes way for new beginnings, and so on). Essentially, the Coyote is like a "way-maker" of new direction as it went about its symbolic role of representing the cycle of life/death in nature."

At the point where we'd part ways to head home, we stopped, stretched, and finished our conversation, promising to meet up this week for a drink and a little live music. I continued back around the reservoir, picking up my pace to jog again, to find my sad, slow stride. A pace where I could see the faces of the dogs and babies passing by, wonnder what kind of bird that is, feeding beside the water, stumpy, black, with a white beak.

Reading about what the coyote might teach us, I'm fascinated by the things that have come to an end in my life, friendships changed or ended, and what that means for new beginnings. Slowing myself down from the desire to sprint, instead finding the right pace to enjoy the journey.

Posted by Rebecca Snavely at 4:22 PM No comments:

Getting Naked: Revealing Yourself on a First Friend Date

It all started when I overheard the name Brené Brown. About to order drinks for me and my friend at the bar, I turned, as if on cue, and without thinking (the benefit of my first glass of wine still in my blood), interrupted an attractive woman speaking to an attractive man.  Only later (sober) did I think I may have interfered with a potential meet-cute.  Buzzed, and elated to hear a potential kindred spirit speaking of Brown's TedTalk, it didn't matter.  I love Brené Brown, I gushed, and the conversation proceeded to other ear-candy, including Krista Tippet's podcasts on "On Being."  We (the ladies) exchanged numbers, and promised to meet for a coffee.

I think I just made a new friend! At a bar! Discussing spiritual and meaningful talks, I told my good friend, finally delivering the promised drink.  "Welcome to Silver Lake," my longtime Silver Lake resident/friend told me.

Three weeks later, my new friend and I met for coffee at Casbah Cafe.  Sitting down, we started on small talk, like what we do for work, the benefits of cococut oil, and returning to church after years disappointment and frustration. About faith to remove life's wrinkles from one's skin and life's scars from one's soul.

We talked so long we had to worry about the parking meter and our empty stomachs, and decided to jump in her car to find food and our next adventure. After eating delicious salads at Food+Lab, we headed downtown where she introduced me to a new obsession, Shareen Vintage.  As we pieced through the racks of dresses, I explained my body type and issues, the right fit I was looking for.  As the 20-something clerk heaped our choices of colorful printed fabrics on a couch, I saw my new friend in a breath-taking gown.  Where do I change, I asked.  Here! she said.  No boys allowed.  As I ran from a three way mirror exclaiming my body-issues in a hip-hugging dress, she joked about getting to know each other quickly.  "Let's get naked!"

And that's part of the beauty of a new friendship that starts on shared experiences and ideas about life and faith — it takes risk, to reveal your lumps and scars in a safe place, yet still sucking in your stomach, waiting to build the trust that allows that deeper sharing with a true soul-friend.

Cheers to eavesdropping, interrupting, talking to strangers, and stumbling upon a kindred spirit. 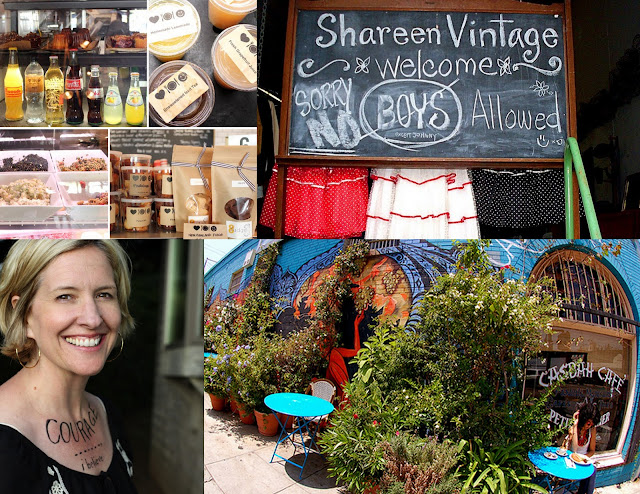 Posted by Rebecca Snavely at 3:45 PM No comments: