It's the people who you meet when you're walking down the street — reason #173 that I love being car-free. If I were encased in a car, I would not hear the girl in front of me singing.  Badly.  I would not have the time to observe her stilted downhill stride, her perfectly bobbed black hair bouncing in time with her short steps. Then to look further, to see the girl just ahead of the crooner, holding tightly to the arm of a bigger boy to find her balance, her feet twist inward, their backpacks swing in unison with their awkward steps.

The crooner's singing grows louder as I quickly gain ground on the group and glimpse of her round face, her mouth open in a perfect circle as she sings, a CD player in her left hand. Her chunky headphones drown out the sound of my steps, the jarring noise of construction workers repairing potholes, the song of birds, the sound of her own voice.

She belts out Demi Lovato and Joe Jonas's "Wouldn't Change a Thing," holding out that last note on "thiiiiiinnng" like a cat that's losing a fight and crying for backup. It is bad. The construction workers hear it over their angry-sounding machines and stop working to identify the sound. She is awful, too loud and terribly off-key, and beautiful, she doesn't care. She sings like no one is listening.

Anne Lamott quotes Michael Pritchard when she writes that people with Down syndrome are God's spies  — perhaps here to see how we're living, how we're loving each other, and I think, to remind us to dance like no one is watching, to sing like no one is listening.  Because in the long run, who cares what two construction workers and a woman running to catch her bus think of your song?  As Demi, Joe Jonas, and my friend for my morning commute sing to us:

"We're perfectly imperfect
But I wouldn't change a thing, no." 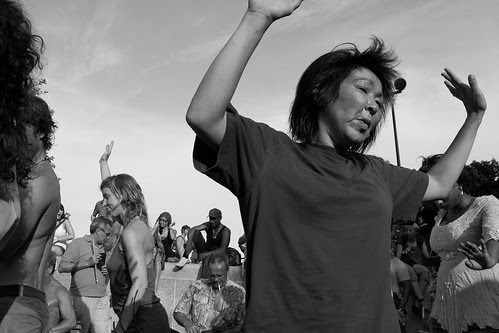 Posted by Rebecca Snavely at 5:09 PM No comments:

Yoga Lesson - Living in the Uncertainty

With my week's pass to Equinox firmly in hand, I march into morning yoga class, holding tightly to my mat and my resolution to become one with my body, to quiet my monkey mind, to be present.

If only Andrew, our yoga guide for the hour, knew the nutjob he was dealing with, barely hearing him over my ongoing mantra of being not good enough to do crow pose (seriously.  WHEN will I get crow pose?) as he adjusts my hip for a more open Warrior Two. But as the hour passes, I become more aware of the safe space, reminded to rest in child's pose, especially necessary when we're working hard. I watch the athletic giant in the front of the room, an inflexible man who never gives up, modify every pose. I may even learn to let go my perfectionism and instead be inspired by the lithe, strong woman easily flipping into a headstand. In downward dog, I obey Andrew and swing my leg behind me, opening my hip to the window that is filled with that sunlight that only shows itself at 7:30 in the morning.

As we hold our hands in prayer position at our heart center, we bow, and honor the teacher within, who guides us through difficult positions on the mat, and in life. We accept living in uncertainty.  There is so much uncertainty in life: I'm attempting to find more funding for Action Kivu projects, including a full-time salary for myself.  I have no idea if that will work.  I'm leaving for my first experience of that desert life of spirituality and house music, Burning Man. Other than dust in my eyes and fairy wings on my back, I have no idea what to expect. But that may just be what it's all about.  Living in the mystery, breathing deeply into acceptance, honoring the work our bodies do, and opening ourselves to the morning sunlight. 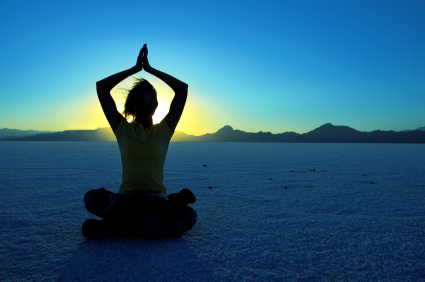 (Photo from SoaringSpiritYogaStudio)
Posted by Rebecca Snavely at 4:59 PM No comments:

Quilts, Kids, Congo and You: Enter to win gorgeous giveaways and empower the women and children of Congo 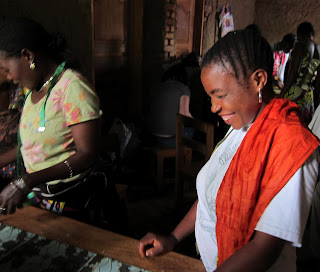 Ernata's smile is contagious and frequent, even in this corner of eastern Congo, where women have few rights, domestic violence is present in a majority of marriages, and rape is used as a weapon of war. Despite her circumstances, Ernata finds reason for hope in her newly-acquired sewing skills and her brand new sewing kit. For only $175 USD, the sewing kit includes a pedal-powered Singer machine (crucial for a land lacking consistent electricity), scissors, fabric, oil, and the means to start her own small business, to fulfill her dream to provide for herself and her family.

This sewing kit was one of 60 given to recent graduates of the sewing workshops in Mumosho and Bukavu, DRC, provided by generous supporters of Action Kivu, through a fundraiser on Handmade By Alissa. Alissa Haight-Carlton is hosting the giveaway once again, and it's not just for sisters who sew! Whether you're crafty or can't stitch an inch, there's something for everyone: a gorgeous tote, bundles of fabric, and various completed quilts, perfect for a wedding or baby shower gift. 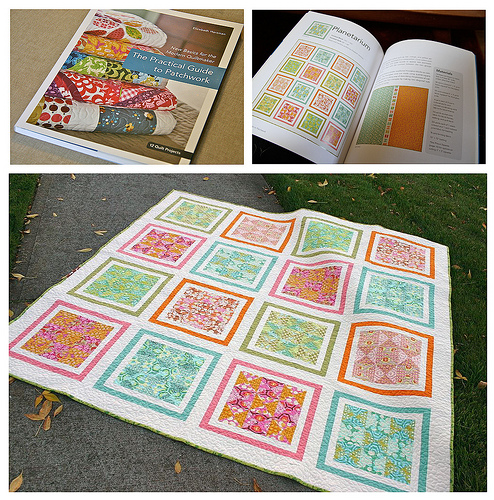 Donate $100 and you are in the running to win a finished quilt by Elizabeth Hartman from her book, the Practical Guide to Patchwork. This gorgeous quilt is a large lap quilt at 68″ x 68.″ 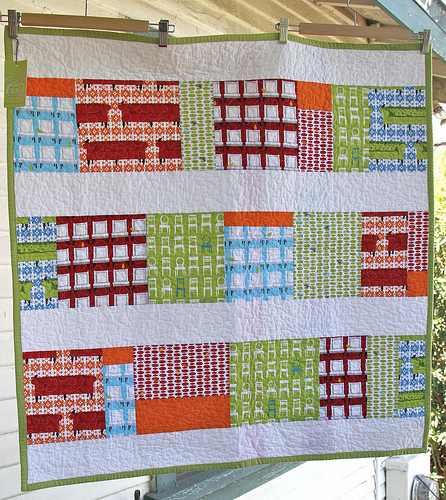 Donate $35 and be in the running to win this vibrant, fun baby quilt by Heather Jones. This quilt measures 35″ x 35.″

Action Kivu's sewing workshop has already started new classes in Mumosho and Bukavu, focusing on the exquisite skill of embroidery, which is in high demand in Congo.  Click here to read about the recent sewing workshop graduation made possible by our generous donors. As we gear up for fall, the graduates of the sewing workshop will sew new uniforms for the vulnerable and orphaned children Action Kivu sends to school.

We're excited to share more photos and stories, but we rely on your support to make this a reality. $175.00 USD purchases a sewing kit for a woman to start her own business. Just $10 per month pays the school fees for a girl to attend high school with a new uniform, supplies and book bag.  Help us reach our goal!

Visit Handmade by Alissa before midnight Monday, August 20, 2012, (Pacific Time) to see more of the giveaways, and know that your donations are tax deductible, and 100% goes directly to the work on the ground.

Roommate and I went to see Mary Poppins, the musical, at the Ahmanson last night.  We went with his friend and her two fairy-tale children, who watched with dropped jaws as Bert danced about the proscenium, and Mary flew into the audience on her umbrella.
There were many differences from the 1964 film; some fun (an expanded Supercalifragilisticexpialidocious number), some disturbing (the lack of a story arc for Mother/Mrs. Banks, and the deletion of the Sister Suffragette song, plus a scene where the toys come to life and there's a life-sized clown — during which I relaxed my eyes and blurred my vision as if I were staring at a poster with a hidden image).  There was a new song, to which the perfectionist in me wanted to throw over my seatmates and dance on to the stage:  "I'm practically perrrrrfect, in every way," Mary Poppins articulated as she pulled lamps and clocks from her magic bag.

My therapist, however, begs to differ. Upon finishing my first visit today with my new — advisor/listener/counselor — and answering such yes|no questions such as "do you identify with: perfectionism? a sense of responsibility?" she advised I read The Gifts of Imperfection by Brene Brown. I proudly announced, "Done!" That's how practically perfect I aim to be. I'd already read the perfectionism book before it was even suggested.

"The thing that is really hard, and really amazing, is giving up on being perfect and beginning the work of becoming yourself." ~Anna Quindlen

Apparently, Mary and I still have a lot of work to do.
Posted by Rebecca Snavely at 9:34 PM 2 comments:

This is my first painting. My first acrylic painting; if I'm honest, I have to admit to the terrible, embarrassing watercolor I painted in my 20s, trying desperately to perfect the art and medium in a mere two classes. My father is an artist, and was teaching a class during the time I was living at home with my parents in Oregon, having once again upended my life in Los Angeles. Once again, I was a 20-something, back in my old bedroom, where the contents of my closet, 35mm cameras, high school yearbooks, and one well-loved and worn teddy bear reminded me that I was stuck in time, back under my parents' roof. 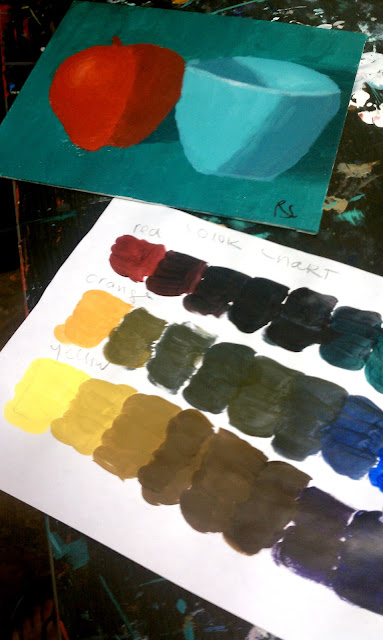 When my friend Jamie invited me to an art class for beginners last week, I made a pact with her, and myself, that I would leave my perfectionism at home. I warned my roommate that I would likely come home with something that looked like a paint-by-numbers done by a five year old, and I was perfectly happy with that.  I was inwardly terrified of what our subject would be, that it would turn into a psych ward in my head if the teacher told us to paint our dreams or our fears, and I'd be paralyzed and paint a cartoon puppy, or create something so dark and twisted I wouldn't be allowed back.

We arrived on a Friday night at 6:30 and took seats in Ann Bridges' lovely studio, the top floor of an old art deco building on Wilshire, in Koreatown. As the late afternoon sun filled the studio, Ann taught us about light and color, squirting acrylic paints onto our palettes, and showing us how to create shadow hues by adding the contrasting color to the pure primary color.  I felt relaxed already; Ann was exactly whom I'd hoped for in an art teacher, a bit scattered as she flit between her four students, giving individual lessons and critiques, her curly hair coming out of its tie, her casual clothes a bit spattered with paint. She was encouraging but direct, funny and open, and played a good mix of music in the background.

Directing us toward a still life, she had us "interpret" the greens of the background, the red of the apple, the turquoise of the cup. As I outlined the shapes and shadows, mixed colors and made mistakes, I felt free to make mistakes and cover up them up, which I think is why I like painting with acrylics.  There really are no mistakes, just choices to tweak and change, a lesson I need to translate into my life now, and looking back at my mid-20s. Making choices to live abroad, to go broke spending my meager savings on an experience, then have to move home and work a dreaded job as a server, with aching feet and hair that smelled of a deep fryer, none of those were mistakes. As a dear counselor advised me, as a writer, I rewrite stories constantly. It's critical to allow myself to the freedom to rewrite my own story.

Working on the shade and highlight of the apple to give it depth, I found more and more peace in the process, freedom to make changes, to work within what I had already created, to be proud of the outcome, even if it wasn't "perfect."

"Painting is a faith, and it imposes the duty to disregard public opinion." ~Vincent van Gogh

Posted by Rebecca Snavely at 1:13 PM No comments: