Unexpected Lessons on an Escalator - Asking for Help

Jackson's mom holds his younger brother's hand and grows ever-smaller as she glides down the escalator, looking back at her son with expectation and encouragement. At the bottom of the short escalator, she calls back, "Come on! You can do it!" A seven-year-old in camo pants and an Indiana Jones hat, Jackson is terrified and frozen, his eyes glued to the constant new step that appears under his little blue Croc sandals. At the top of the down escalator, little Jackson draws a small crowd as we wait for him to jump on the moving stairs so we can board our plane to Charlottetown, P.E.I.

"Do you want to hold my hand?" a young 20-something woman offers, standing patiently behind the little man. Gripping the rail and tilting back his head, he looked at her with round eyes from under the wide brim of his hat and says quietly, but clearly, "I need help."  He grips the girl's hand and bravely, together, they step onto the moving stairs.

At the bottom, he carefully hops off, watching the steps disappear into the floor. "You made it!" his mother exclaimed. "Yes," Jackson says solemnly. "That girl saved my life."

How often do we need to admit, "I need help," to reach out and take the proffered hand of a friend, or a stranger? And, as Jackson shows us, to recognize the family, friends and strangers who help save us as we navigate the trickier times in life.

Meeting Henry: What is it you plan to do with your one wild and precious life? 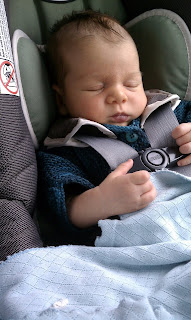 Henry will never remember it, the first time we met. Asleep in a car seat still a bit too big for his five-week-old body, driving home from the Portland, Oregon airport. I offered my fingers and in his sleep his miniature, pink, wrinkled fingers gripped mine, my other hand shading his face, mottled with baby acne (cruel, cruel world), from the sun.  His hair, following the peaks of an old man's receding hairline, was slick against his brand new skull.

Riding the Los Angeles city bus home from work tonight, I sit next to an slender, elderly man, dressed in chocolate-brown slacks that just barely touch his loafers, a collared dress shirt in a softer, tan brown neatly pressed with an iron-crease down the arm, a gray sweater vest falling from his sloped, slender shoulders.  A simple gold wedding band, long worn, digs into the creases of his left ring finger. His hands, mottled with sun spots, clutch an elegantly carved wooden cane. His white hair follows the peaks of an old man's receding hairline.

He seems fragile, and I'm amazed he's on the bus by himself. I want to shield him from the glare of the sun, to balance him against the bus careening around corners and bumping over pot-holes. To ask him what his life has been.  When we do speak, I learn he is not confident in his English. In broken sentences and hand gestures, he tells me he has been here four years, and has has two daughters and a son in L.A. He is from Iran.  I wish I could ask him his brightest, fondest memories of Persia, his saddest, most difficult times, where he has traveled, whom he has met, known, and lost.

Looking at Henry's face, watching his little man mouth form "O"s, his face full of expressions as he dreams (surprise, shock, concern, severe disapproval), I want to tell him all the adventures he will have. I wonder where he will go, whom he will meet, what memories he will create. As his aunt, I cannot wait to introduce him to the joy of taking the bus, of walking slowly to notice the smallest creatures, of running til it feels like your lungs will burst, of road trips without maps, of taking the time to talk to strangers.

For now, I'm happy to stare at him as he sleeps and wonder what he's dreaming.


“Tell me, what is it you plan to do
with your one wild and precious life?”
~Mary Oliver

Posted by Rebecca Snavely at 8:16 PM No comments: