Geena Davis on Adding Women to the Picture: Put It In the Script

At the Women's Network Funding conference, actor and activist Geena Davis gave the women gathered there a powerful metaphor to add women back into the picture of society, and to take conscious action to do so. After watching videos with her two-year-old daughter and realizing that females were represented at a rate of one to every three male characters, and often highly sexualized and stereotyped, she started the Geena Davis Institute on Gender in Media. : I have learned first-hand the power of research," she told the conference. "And the fact that research, data, facts, dispel myths and rumors.” 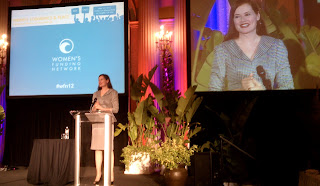 “The fact is that women are seriously under-represented across all sectors of society," she continued. "For the most part, we’re not aware of the full extent. About two years ago, the White House Project released a benchmark report where they looked at 10 sectors of society, like academia, business, law, politics, media, sports, etc., to find the percentage of women in positions of authority. And the average, across the board, of all these important sectors of society, was 18%. With just little variations. How is that possible? Across all sectors of society, everything is stalled out at about 18%? But that number, is all around us, if you look for it. For example, the number of women in congress is 16%. 17% of movie narrators are women, and that’s also the percentage of women in the animator’s guild. My body fat is 17%. It’s strange, how often that comes up.”

“So why did the percentage of women in leadership stagnate at about 17 or 18 percent? Here’s another figure, the percentage of women in crowd scenes, in movies, is 17%. So could it be, that, if all the media that we are consuming, the entertainment media, has this huge imbalance, couldn’t it be, that that looks normal to us. That we cease to see it, we don’t recognize it, it looks normal. So that when there’s one or two women on a board, we have a couple of tenured professors, we have a couple female law partners, they feel done. It’s normal to us. We’re not seeing images of women and men sharing the sandbox equally. We’re not walking into situations and saying, hey this body of people is not half women, it looks weird. It doesn’t look weird, because that isn’t what we’ve ever been exposed to.”

This is the solution: Add women.

“Put it in the script,” Geena told us. Though it was a specific reference to the fact that quite often filmmakers aren’t aware of the status quo, and need to be told, in writing, how to set a scene. “A crowd gathers, 50 percent of whom are female.” Seems obvious, no? But it isn’t. “Put it in the script” can be a metaphor for all of us, whether we’re in media or education, agriculture or the arts. Remind people that women hold up Half the Sky, as Nicholas Kristof and Sheryl WuDunn did with their book and subsequent multi-media movement by that title.

At Action Kivu, we're doing just that: sharing women's stories, bringing them out from behind the curtain of silence to share their visions for their communities. Training them in a marketable skill to start a business and provide for their children and families. The sewing workshops in Mumosho and Bukavu are graduating 60 women this month, who will stand out and add their voice to the unfolding story of the Congo. You can help "put it in the script;" we're still in need of funds to provide sewing machines for each of the graduates to start her own business!  Click here to learn more about what the $175 / sewing kit provides, and follow the link to donate. No donation is too small, and every dollar makes a difference.

“In medicine,” Geena said, “very often the cure comes from the same source as the disease, right? So the good news is, as powerful as media is, it can have a positive impact, it can actually create opportunities to overcome social and cultural barriers. For example, we know that if girls watch female characters in un-stereotyped activities, they are more likely to pursue non-traditional vocations. In other words, if they see it, they can be it.”

“The time for change is now. And the great thing is, that we have incredible agents of change, filling this room. All of us, all of us are powerful agents of change. And we embrace what Dr. Martin Luther King called the 'fierce urgency of now.' We cannot wait to see if real gender equality happens in the natural course of time because all the evidence shows us that it will not. The lives of too many girls are at stake, as the Nobel Prize winning economist Professor Amartya Sen tells us, at least two million girls die worldwide, every year, because of inequality and neglect. Girls are disappearing, not just as fictional characters, but in the cold light of day.”

“What we need, across all sectors of society, is to add women. Boys and girls need to see an abundance of female characters doing interesting and important things and in leadership positions in the media they consume. And we need more women behind the cameras. If there’s a woman producer, writer, director, the number of female characters on-screen goes up. We need more women in the realms of business, academia, law, the military. From the people reporting the news to the people making the news, we need to add women. And to the ranks of policy makers, corporate boards, justices, presidents and prime ministers, we need to add women, include women, encourage women, vote for women, and hire women.”

Read more of Geena Davis' speech at World Pulse.
Posted by Rebecca Snavely at 10:23 AM No comments:

My friend Cate and I first met Amani Matabaro via e-mail, after our friend, Kevin Sites, recommended we connect with him to support his work with women and children in eastern Congo. Kevin had worked with Amani as a translator and fixer in eastern Congo in 2005, during one of the many times of conflict and war that have left Congo and its people traumatized. Kevin told us about Amani's gentle spirit with the stories of the women and his passion for peace and the rights of women and children.

Over the past two years working with Amani via Action Kivu, we've experienced just that in his work, the stories and photos he shares, and finally, in person on our visit to Congo in January 2012 and his visit to the U.S. in March. Now you can meet Amani, via this beautiful and powerful video introduction into his life and world, who is doing so much for peace and the rights of women and children in eastern Congo. Thanks to the Enough Project's Raise Hope for Congo for creating the series.

Action Kivu is 100% volunteer in the U.S.  Every dollar you donate goes directly to the work on the ground in Congo and is tax-deductible. Please consider a gift to the women today; the sewing workshops will graduate this month, and we need to provide sewing machines for the women to begin their own businesses. Visit http://actionkivu.org/ to learn more!
Posted by Rebecca Snavely at 7:54 AM No comments: