Writing and life advice: Have less stuff (and don't stab Al Franken in the head with a pencil)

Last night WriteGirl, a non-profit that mentors at-risk girls with professional women writers, hosted a fundraiser to honor five women for their bold writing.  After a warm and funny introduction by one of her former roommates, Sarah Silverman took the stage.  She twisted her note cards in her hands, explaining that her speech would be one of those filled with bullet points and no meaningful ending. 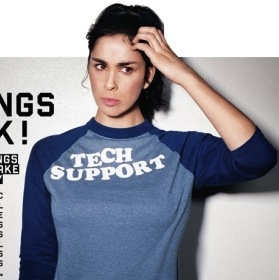 The things I learned from Sarah Silverman's hilarious acceptance speech for her Bold Ink Award:

Feminine facial hair and the experiences we endure to remove it is ALWAYS funny. Sarah talked about her first brow "separating" appointment, to make two eyebrows out of the one. Following the clinician back to the room, the woman stopped, turned around and asked Sarah, "So, will it just be the mustache today?"

Whenever possible, reference NADS, from Australia.

Stabbing Al Franken in his "winter Jew-fro" while a fellow writer on SNL is a funny story, but might not have made sense in the moment. "I wasn't asked back to SNL," Sarah told us. "I'd like to blame the fact that everyone saw me stab Al Franken in the head, but when I look back at the sketches I wrote, they were terrible." (A reminder to keep writing / working, shitty first drafts are inevitable and necessary.)

"Write prose just like you talk. Just take out all the likes."

If you're supporting yourself and your stuff by "doing something that crushes your artistic soul, stop doing it. Just have less stuff."
Posted by Rebecca Snavely at 11:45 AM No comments:

"Animals in nature always have a message for us," my DailyOM email told me. "Start noticing what animals show up in your life and when." 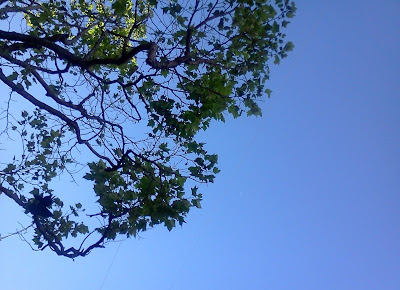 I live in Los Angeles, in the middle of UCLA's frat community.  Thus, the animals I've encountered recently include a sidewalk squirrel I had to sidestep, so focused was he on the spilled In&Out, he didn't give a damn about human foot traffic.  A crow who kept dropping branches on my head before successfully beaking one with with to build her nest.  And a drunk man-child weaving his way home during my morning walk.  What messages might I have missed?

I noticed the effort the crow made, never giving up on securing a branch in her beak. As the little bits of tree limb fell down into my hair I was reminded that I'm just a visitor, living in their wild world where nests need to be made.  I saw two other crows pecking at a plastic bag outside an overturned garbage can and my heart broke a little.  A tiny gecko spun in dazed circles after my friend and I and our big feet accidentally interrupted his long journey across the sidewalk.  Though his tail was smushed a little, he regained his balance and another passerby assured us that lizards' tails are made to regenerate.

"Animals share our planet with us, but experience it differently—each has its own abilities and gifts that allow them to interact successfully with the natural world. Since we are merely one manifestation of the universe’s energy in action, when we feel the need for direction we can turn to animals in nature for guidance. Animals can show us different ways to approach and deal with our challenges."

So, the lessons I'm taking from the animals in my wild life:  nesting, regeneration, and standing my ground to get my morsel in the middle of the ebb and flow of life and traffic.  Oh, and not to get so drunk I'm stumbling home at 7am.  Thanks, fratanimal.
Posted by Rebecca Snavely at 10:03 PM No comments: