Every morning
the world
is created.
Under the orange

of summer lilies.
If it is your nature
to be happy
you will swim away along the soft trails

for hours, your imagination
alighting everywhere.
And if your spirit
carries within it

each pond with its blazing lilies
is a prayer heard and answered
lavishly,
every morning,

Posted by Rebecca Snavely at 8:14 AM No comments:

"Oooh, Pablo, I lo-o-o-ve you!" one girl hollers as loud as she can while still trying for silly sultriness, writhing somewhat suggestively in short shorts and a tee shirt.

Her friend laughs as the two boys on a balcony across the street holler back, decidedly less seductively: "Take off your shirt!  Show us some nipple!"

"That is SO degrading!" the girl screeches back, her faux-Latin-lover accent gone.

Long pause, and then a boy's deep bellow into the warm night air, "I'm sorry I objectified you!"

In return, "Apology accepted!"  And she quickly resumes her play of swooning in a silly, seductive accent. 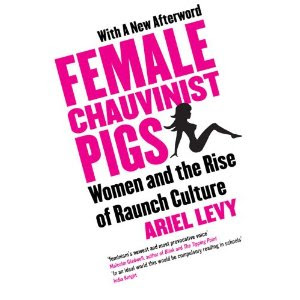 It gave me a glimmer of hope, after reading Female Chauvinist Pigs, that not ALL 20-something girls are buying into the need to bare their breasts on demand.

But for all my friends already worried about raising kids in our sex-saturated society, reading this book might induce self-sterilization.  As writer Ariel Levy points out, Girls Gone Wild is too frequently the norm.  The real, interesting, many-tiered parts of sexual liberation has been pushed aside as raunch has become the only alternative for expressing sexuality.


"We have to ask ourselves why we are so focused on silent girly-girls in G-strings faking lust.  This is not a sign of progress, it's a testament to what's still missing from our understanding of human sexuality with all of its complexity and power. We are still so uneasy with the vicissitudes of sex we need to surround ourselves with caricatures of female hotness to safely conjure up the concept of 'sexy.' When you think about it, it's kind of pathetic. Sex is one of the most interesting things we as humans have to play with, and we've reduced it to polyester underpants and implants. We are selling ourselves unbelievably short."

Levy is a great writer, making what is at times a horrifying subject entertaining with her verbal spin:

"Without a doubt, there are some women who feel their most sexual with their vaginas waxed, their labia trimmed, their breasts enlarged, and their garments flossy and scant. I am happy for them. I wish them many blissful and lubricious loops around the pole. But there are many other women (and, yes, men) who feel constrained in this environment, who would be happier and feel hotter — more empowered, more sexually liberated, and all the rest of it — if they explored other avenues of expression and entertainment."

"Is this really the best we can do?"

Tom Shadyac sits mere inches from an angry bowl of yogurt. Why is the yogurt quivering with angst? Because Shadyac has just sent waves of tension into the ether, and -- the yogurt is ALIVE. A scientist with a Will Ferrell 'fro and awesome 1970s specs has inserted sensors into the yogurt, and then caused Shadyac stress by referencing his agent, lawyer, and ex-wife. Shadyac, not at all connected to the yogurt except by the air shared between them, made the yog-o-meter fluctuate wildly just by the energy he was exuding, his stressful feelings of unresolved conflict.

Watching "I Am," Shadyac's documentary about the connectedness of all things, I was in turn inspired, moved to tears, grossed out (look AWAY when you see an image of an eyeball), and concerned that I might never want to eat yogurt again. And I love yogurt, especially the good, thick Greek kind. But because my yogurt has live bacteria, part of the reason it's so good for me, is also the reason that it responds to the energy I'm giving off. So now, just before I devour it, I send waves of love and sunshine to my Chobani.

The brilliant minds and hearts whom Shadyac interviews on his journey warn us that we're facing a major change in how we live.  If we don't act in more compassion and cooperation, we won't survive, or at least not living life as we know it. The film highlights that in Darwin's Descent of Man, published in 1871, Darwin only mentions the phrase “survival of the fittest” twice, while he mentions the word “love” 95 times.  "As Thom Hartmann notes in “I AM,” behavior across the animal kingdom regularly demonstrates cooperation—from the group selection of a watering hole, to the flocking of birds, to the schooling of fish.  “It’s in our DNA,” says Thom Hartmann.  “We are born to be our brother’s keeper."  (Borrowed from Steven Meloan's blog.)


Shortly after watching the doc, I started reading the book Female Chauvinist Pigs: Women and the Rise of Raunch Culture.  I'm having a hard time putting it down, it's so juicy and enlightening.  More on that in another post.  Tonight, I was reminded of the theory of cooperation and a sea change in our way of life while reading about the women's and anti-war movements in the 70s.  Author Ariel Levy writes, "Brownmiller, characteristically, was seeking something more momentous and unwieldy: nothing less than the overthrow of the patriarchy, which had to start in the minds and bedrooms of Americans as well as the workplace — change from the inside out." She continues to quote how Bill Ayers described his involvement in the Weathermen's protest activities, "I was committed to being a part of what I thought was going to be a really serious and ongoing rebellion; upheaval that had the potential of not just ending the war, but of really overthrowing the Capitalist system and put[ting] in its place something much more humane."

Where are we making those changes today?  What can we do?  We can start with awareness of the emotions that we feel and are exerting upon every living being, even our breakfast foods.  And we can try to be the change we want to see, as one loving and powerfully compassionate man taught us.

We can pay more attention to each other, and injest more Michael Franti:

Posted by Rebecca Snavely at 8:31 PM No comments: