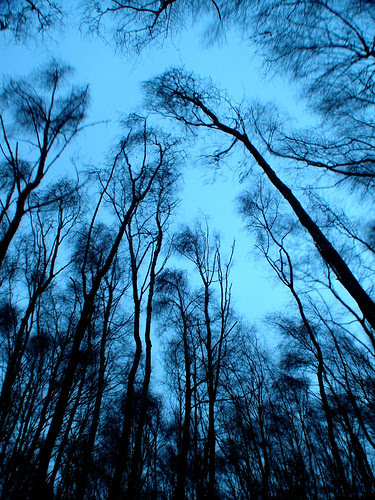 Storeton Wood trees in the wind 2, originally uploaded by jimmedia.
The wind is gusting and howling tonight, blowing through cracks in windows to rattle doors. I love nights like this — it reminds me of story book nights. It makes me realize how small I am in the face of Weather, of the World, which makes me realize more may be afoot than we notice on a daily basis.

Tonight I'm thinking of Popi, my best friend Caroline's beloved grandfather who died this week, while recovering from an open heart surgery at age 92. He was loved and loved his family, his community, lived a rich, full, intelligent life, and will be missed.

I'm also reminded of A Wrinkle in Time, which Madeleine L'engle opens with:

"It was a dark and stormy night.

"In her attic bedroom Margaret Murry, wrapped in an old patchwork quilt, sat on the foot of her bed and watched the trees tossing in the frenzied lashing of the wind. Behind the trees clouds scudded frantically across the sky. Every few moments the moon ripped through them, creating wraithlike shadows that raced along the ground.

"Wrapped in her quilt, Meg shook."

And Mrs. Whatsit comes with the wind, and thus the beginning of the adventure into the unknown.

Here's to the unknown and dark, windy, stormy nights.
Posted by Rebecca Snavely at 10:59 PM 2 comments:

Free 2 Be Me Dance video - I Hope You Dance

In February, I posted on Huffington Post about the amazingly fun and joyful experience of visiting Free 2 Be Me Dance, a ballet / dance class in Los Angeles for kids with Down syndrome.

Now you can visit the class via a video created by Marisol Montoya.

Posted by Rebecca Snavely at 12:43 PM No comments:

Crossing the Swamp - the rich and succulent marrows of earth 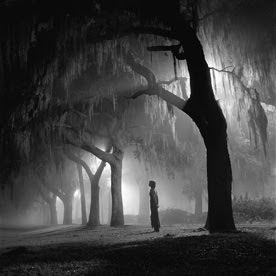 There's something about the bayou, Spanish moss, weeping willows, wading through untamed growth and grass. It's always held an air of mystery for me. I remember a thrilling teen novel that was set in the hot, sultry South, in which a mother had made a deal with the dark side to never grow old, and made the same pact for her teen aged son and daughter. To survive without people finding out her secret, she married wealthy men, only to kill them once they started to suspect they would never grow old together. They lived in a mansion far away from town — and if people happened to talk about the eerie resemblance of mother to daughter through the generations, it was okay. It was the South. 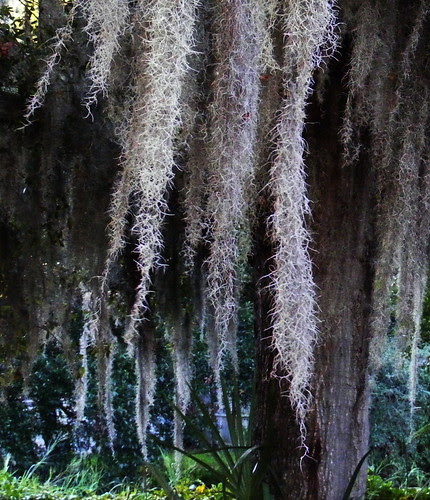 Here is the endless
wet thick
cosmos, the center
of everything — the nugget
of dense sap, branching
vines, the dark burred
faintly belching
bogs. Here
is swamp, here
is struggle,
closure —
pathless, seamless,
peerless mud. My bones
knock together at the pale
joints, trying
for foothold, fingerhold,
mindhold over
such slick crossings, deep
hipholes, hummocks
that sink silently
into the black, slack
earthsoup. I feel
not wet so much as
painted and glittered
with the fat grassy
mires, the rich and succulent marrows
of earth — a poor
dry stick given
one more chance by the whims
of swamp water — a bough
that still, after all these years,
could take root,
sprout, branch out, bud —
make of its life a breathing
palace of leaves.

~"Crossing the Swamp" by Mary Oliver

Knowing what a luxury a tub of clean, hot water is, a bath really is a guilty pleasure.  But tonight it felt necessary to relax and sleep — and blog. 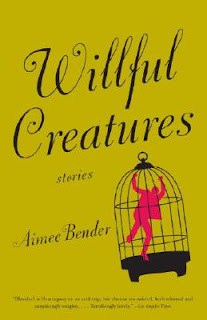 I took Aimee Bender's Willful Creatures in with me.  She is a genius of magical realism.  Here are a few passages for you, so you'll go buy her books, and get in line with me for her new book coming out in June: The Particular Sadness of Lemon Cake.

Aimee was at a literary pub crawl I attended a few months ago, and, explaining she couldn't often read this short story at regular book store readings, she shared "Motherfucker" with us.

He never liked any of them for longer than one or two times. Or, he liked them but not enough to keep calling.  I love all women, he told himself. He liked to try on hats in stores.


One afternoon, he was at a fancy Bel Air party on a damp lawn talking to some damp and fancy people.  ... The motherfucker wandered across the lawn to the starlet, famous for her latest few films, wearing the red straw hat and matching red dress, the one watching her four-year-old play on the lawn chairs, the one whose husband had left her for a man, or so said the newspapers.  Everyone else was afraid to talk to her. ...

The motherfucker went home and rented one of her latest movies and watched it closely, and even though it was a comedy, he looked at the smile on her face and decided she was possibly the saddest person he had ever met or pursued. ...
He stepped closer. For some reason, his hands were shaking.  Using his finger as a pointer, he drew an invisible line around her. He said 'Listen. Look. Desire is a house.  Desire needs closed space. Desire runs out of doors or window, or slats or pinpricks, it can't fit under the sky, too large. Close the doors. Close the windows. As soon as you laugh from nerves or make a joke or say something just to say something or get all involved with the bushes, then you blow open a window in your house of desire and it can't heat up as well. Cold draft comes in. ...
He didn't call her that day.  He didn't call her the next day.  She realized she did not have his phone number, could not tell him that she had to go on location to shoot the movie about people with problems but would miss him.  During her movie the director asked her to smile but she said no. "This movie," she said, "I am going to stay in my house."
On the screen, she was so luminous in her seriousness, she made the whole cinema fill with tension, so much so that every cinemagoer went home charged up like an electrical storm, fingers in sockets, so much so that she got nominated for seven awards. The motherfucker, who never called again, watched her win from the quiet of his small bedroom.  She was wearing a dress the color of the sky before it rains and had become, suddenly, beautiful. She had been something  else before, but now she was something else from that. She thanked her parents most of all, her father the train conductor, her mother who rode the trains back and forth across the country to be with him. The motherfucker held his own body close. His apartment was very plain. 'This is the house of your desire,' he whispered to himself, looking at the small walls behind him, and when he closed his eyes, the torrent of longing waiting inside was so thick he thought he might drown in it.
~ Excerpt from "Motherfucker"
Posted by Rebecca Snavely at 12:48 AM No comments:

I am Ugly Betty: a future beyond film and fashion 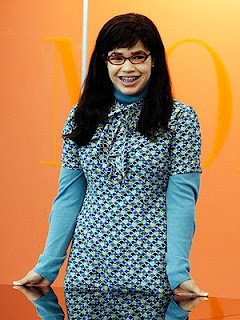 With the series finale airing next Wednesday, I've started watching "Ugly Betty" again. In last week's episode, Betty turned down a fashion columnist job when an ex reminded her that fashion is simply not her passion. She wants her writing to highlight the world's needs, real life people whose problems are far greater than what shoes go with which bag.

Throughout the series, it's obvious that Betty's cheery attitude and hard work is what gets her ahead, but it's equally obvious that she's in the wrong industry. Fashion's not the right fit. It's so easy to get into a job, an area of life, and move forward without thinking: is this what I want?

I've been in the film industry off and on for most of my adult life, but Monday night, when Cate and I pitched Action Kivu to the Los Angeles Modern Quilt Guild, I was reminded once again that THIS is what I want to do. I felt high on adrenaline and energy as I walked out of Home Ec, a fun, funky shop filled with fabulous fabrics, sewing machines and crafty, creative women. It was our first pitch, and a good test to work out the kinks of our five-minute presentation covering the conflict in the eastern Congo and what Amani and Amini are doing to empower and educate the women and children through the Kivu Sewing Workshop and sending kids to school.

It was inspiring to see a community of women come together, and to see their interest and compassion for women in eastern Congo. The L.A. Modern Quilt Guild will be working on a quilt to raffle to raise money both for their own non-profit status, and to support their sewing sisters in Congo. Cate and I are waiting for fiscal sponsorship so we can start raising money and take your tax-deductible donation to help support Action Kivu. More soon! (And if you're a quilter - check out the main page of the Modern Quilt Guild to find if there's one in your city.)
Posted by Rebecca Snavely at 10:02 AM 1 comment: 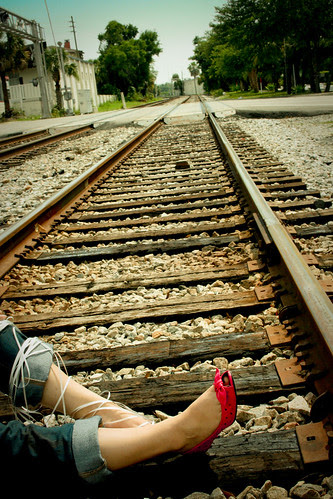 Even though my body is slowly shutting down and my bed is calling to me, I'm starting to get that sense of excitement that I crave in life.  What's next?  I want to live life wide-eyed and wondering. Tonight, my eyes are fighting me, so more will have to come later.

Tired, but excited for the unknown. While waiting on job news, I'm going to dive into a stack of books just delivered from Powells.com (The Corrections, A Thousand Sisters and American Primitive), and "Paris, Texas" waiting for me to un-sheath it from its red and white Netflix wrapper.

Welcome, unemployment, and all that is unknown.

Posted by Rebecca Snavely at 9:15 PM No comments: