According to this - my tendency and desire to explore, roam (and conquer?) is part of my heritage as a Sag.

Sagittarius (Nov. 22 to Dec. 21)
In your quest for freedom, Sagittarius, you've been exploring the world for millennia. You may have crossed the country in a covered wagon or the ocean as a Spanish explorer. And, you didn't hesitate to invade and defeat the cultures you met to forge your new life. Perhaps you pursued a spiritual calling as a priest or evangelical missionary. Either way, you were often separated from your family and culture. You've become a budding planetary citizen … now your task is to put down roots and blossom.

What's your astrological past life?
Posted by Rebecca Snavely at 8:57 AM No comments:

Between China and India: Harmony in Bhutan

How telling that the peaceful democratic vote - enforced by the monarchy with nary a protester in sight - was won by the Bhutan Harmony Party. Check out the story here.
Posted by Rebecca Snavely at 5:22 PM No comments: 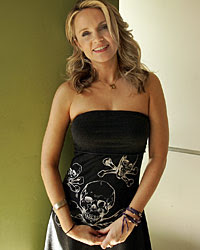 One of these things is not like the other...

Wysocki urges you to yuck it up with some UCLA comedy!

Firstly, TONIGHT (Tuesday) is the premiere of my dear friend Caroline Williams' hilarious sitcom "Miss Guided" on ABC. Caroline, (who happens to be funny, smart and wildly gorgeous), has been receiving rave reviews for the show, which charts a woman whose teenage insecurities resurface after taking a job as a guidance counselor at her old high school. There are seven episodes, so don't miss them!

Tonight's episode comes on after "Dancing with the Stars"…Which features Adam Carolla…And thus I smoothly segue into "The Hammer" starring Adam Carolla!

"The Hammer," a romantic boxing comedy, is a wee indie I Associate Produced that is opening this Friday! The film is also receiving stellar reviews, with Variety comparing it to Cukor's "Pat and Mike" and the Reporter declaring it to be more akin to "Rocky" than any boxing film to date. For those skeptics who connect Adam with gross man humor, I can guarantee his performance will charm the pants off you. (Or some other clothing item protecting your modesty…if you have any modesty left, that is.) Because its theatrical release is so tiny, the box office numbers this weekend will make or break the film, so please check it out!

Here's where "The Hammer" is playing: 
From the cockles of my post-Patrick Day heart (the what?!), thank you for supporting comedy!

Welcome to the Snavelys, Robert 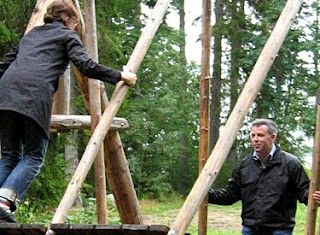 My sister and Robert announced their engagement to the parents last night! Therefore, it is official -- and I'm officially allowed to worry about the bridesmaid dress and how my hair will look.

But back to them - congratulations to Christina and Robert!

Check out a beautiful, kind of surreal video from their trip to Estonia.


(Photo and video courtesy of Kristi)

One day you finally knew
what you had to do, and began,
though the voices around you
kept shouting
their bad advice--
though the whole house
began to tremble
and you felt the old tug
at your ankles.
"Mend my life!"
each voice cried.
But you didn't stop.
You knew what you had to do,
though the wind pried
with its stiff fingers
at the very foundations,
though their melancholy
was terrible.
It was already late
enough, and a wild night,
and the road full of fallen
branches and stones.
But little by little,
as you left their voices behind,
the stars began to burn
through the sheets of clouds,
and there was a new voice
which you slowly
recognized as your own,
that kept you company
as you strode deeper and deeper
into the world,
determined to do
the only thing you could do--
determined to save
the only life you could save.

Posted by Rebecca Snavely at 2:38 PM No comments: