This I Believe - Mystery and Paradox

From the NPR series titled "This I Believe"

"Religious belief has made me comfortable with ambiguity. "Hints and guesses," as T.S. Eliot would say. I often spend the season of Lent in a hermitage, where I live alone for the whole 40 days. The more I am alone with the Alone, the more I surrender to ambivalence, to happy contradictions and seeming inconsistencies in myself and almost everything else, including God. Paradoxes don't scare me anymore. ...

Whenever I think there's a perfect pattern, further reading and study reveal an exception. Whenever I want to say "only" or "always," someone or something proves me wrong. My scientist friends have come up with things like "principles of uncertainty" and dark holes. They're willing to live inside imagined hypotheses and theories. But many religious folks insist on answers that are always true. We love closure, resolution and clarity, while thinking that we are people of "faith"! How strange that the very word "faith" has come to mean its exact opposite.

People who have really met the Holy are always humble. It's the people who don't know who usually pretend that they do. People who've had any genuine spiritual experience always know they don't know. They are utterly humbled before mystery. They are in awe before the abyss of it all, in wonder at eternity and depth, and a Love, which is incomprehensible to the mind. It is a litmus test for authentic God experience, and is -- quite sadly -- absent from much of our religious conversation today. My belief and comfort is in the depths of Mystery, which should be the very task of religion." 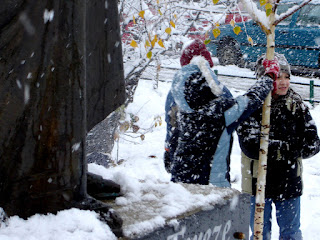 Posted by Rebecca Snavely at 2:29 PM No comments: 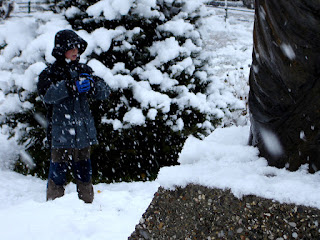 The pilot light on my heater is out, and my room, though bright with the beautiful winter sunlight of Los Angeles, keeps the cold from the night. A weak explanation as to why I'm sitting with furry boots on and a space heater aimed at my feet in sunny So Cal. Mostly, I cannot stand to be cold, and even 64 degrees feels bone-chilling.

Which is why I am consistently shocked when I look back over the pictures of where I was at this time last year. Here are pictures of the first snowfall in Mitrovica -- when I joined the kids in a snowball fight. They quickly realized they had a helpless adult with no aim, and ganged up on me, eventually chasing me into the nearest cafe.

If you watched the last episode of "Studio 60," you'll remember they used coconut shavings to make fake snow. Beautiful, but from where I stood taking these shots, there were no coconuts to be seen.
Posted by Rebecca Snavely at 2:06 PM 1 comment:

School Day 24, taking place on 6 December, is all about linking schools across conflicts, tensions and divides.

Everywhere children who have inherited mistrust, dogma and even hatred from the older generation will have the chance to talk openly with children from "the other side".

Children from Moscow and Chechnya will have the chance to discuss their different attitudes to the conflict. There are also link-ups between Israelis and Palestinians; Indians and Pakistanis; Albanians and Serbs in Kosovo; Iranians and Americans; Sinhalese and Tamils. -- By Jasper Bouverie
Co-ordinator, School Day 24
http://news.bbc.co.uk/2/hi/in_depth/6187034.stm

Mitrovica -- the city where I lived in Kosovo was chosen. Students from both sides of the river found they have a lot more in common that they have been taught.

What are the most popular books and the greatest music hits?

Fjolla : The music that is listened to by the youth in south Mitrovica is rock music, rap music, all kinds of music. But the most popular for now is rock music. I read love stories and science fiction. My favourite book is Tess of the D'Urbervilles by Thomas Hardy.

Would you be able to invite us to talk with you?

Maja : Yes, of course, if we had an opportunity to meet up with you here or in your area, we would do it. And we would be glad to see you and to work with you together in a group. And that's all.

What do you think would have been different if we were together in the same place today?

Ivana : Talking is different when you are talking to someone like I am trying to do now. But we do not have another solution, so... so... we are talking like this. Talking is easier of course when you're able to look at someone.

But any solution is good when you have no choice.

If you know me well, you may well know my love for The Mary Tyler Moore Show. In one episode, Ted Baxter delivers a pearl of wisdom -- most likely one he is not aware of how wise it is.

Mary complains of boredom with her life, and Ted sums up her problem as attitude.

Or, you can WAKE UP! EAT BREAKFAST! DRIVE TO WORK! SAY HELLO TO FRIENDS! WORK! EAT LUNCH! WORK! GO HOME! EAT DINNER! WATCH TV! READ A BOOK! GO TO SLEEP!"
It's all about perspective.
Thanks Ted Baxter.
Posted by Rebecca Snavely at 11:38 AM No comments: